First presented at São Paulo’s Museum of Image and Sound in 2017, this two-channel video installation by Ana Hupe features immigrant women where they live: Berlin and São Paulo. Facing the camera, each reads an excerpt from early 19th-century foreigner’s accounts of Brazil, chosen by themselves out of a selection provided by the artist.

In one video, recorded in Berlin, women from Latin American countries read reports signed by Georg Heinrich Langsdorff, a German explorer who led expeditions across Brazil. In the other, in São Paulo, black women mostly born in African countries but some in Haiti and Brazil (the latter having migrated from within the country) voiced reports by Mahommah Gardo Baquaqua, from Zoogoo (now Djougou, Benin), whose words from the same period are the only known testimony of someone who was enslaved in Brazil. Deliberately left with no further guidance by the artist, some women spontaneously react to their own readings, sharing critical comments and personal experiences.

Originally named Malungas, a term used by the enslaved people to refer to those who were displaced from Africa in the same ship, the diptych now belongs to a wider project re-titled altogether to Women of the fourth world. The project’s starting point, the encounters with immigrants, was prompted by the artist having advertised a call for immigrant women to pose for portraits in exchange for a modest fee. These pictures were taken following the cartes-de-visite style, by photographers like German Albert Henschel, who was taken to Brazil by the Portuguese Court to enable them to be portrayed following the same aesthetics of other European royals. Once in Brazil, Albert Henschel would also turn his attention to the enslaved people, often portraying them with the same remarkably dignifying aesthetics. In Hupe’s project, the portrayal of these women alludes to a strategy for social visibility. Alongside the video installation and these analog portraits, Women of the fourth world also comprises: photogram posters produced to attract participants; other posters using the same technique, featuring poems; an audio installation of Ana Hupe documenting her own experience as Brazilian working as care-assistant in Germany; and the video-recording of a marriage of convenience between a Latin American immigrant and an European.

By exploring multiple conditions of migration, the work touches upon structural issues of Latin America's colonisation history and versions of displacement therefore generated, from the slave trade to contemporary migration flows. On the latter, the work contrasts the condition of Latin American immigrants in Europe to women who are the immigrants in Latin America itself. The hierarchy therein implied highlights the cruel dynamic of the coloniser’s logic replicated within the colonised territories and their structures of power.

While the title clearly and ironically alludes to the pejorative term third world, it also aims to subvert it by deviating from such notion. Ana Hupe’s fourth world points to another dimension, beyond the material, three-dimensional space: an in-between identity space immigrants largely fall in by never fully belonging to the culture of where they live while often no longer fitting in the places they came from either.

*Cecilia Vilela is an Arts Communications Consultant based in London. She also works in curatorial projects, assisting curator Alexia Tala in projects including the 22nd Bienal de Art Paiz, Guatemala (May 2021). Cecilia is currently undertaking an MA in Art History and Theory at the University of Essex, UK, for which she was awarded The Eleonore Koch Fund.

Caption reads: “Meu futuro aqui ou no meu país?” [My future here or in my country?] 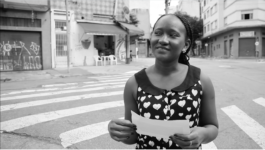